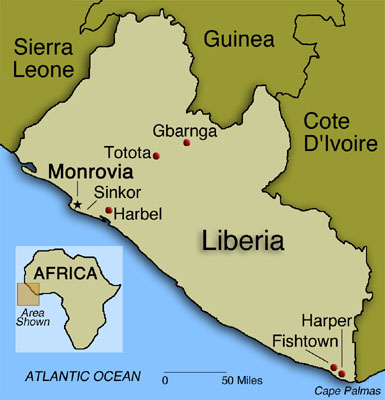 By the grace of God, the months of March and April has ended and we want to share with you once again what the Lord has accomplish in this part of the world in the expansion of his Kingdom, the transformation of human lives through His Holy Spirit and the advancement of the Gospel of Jesus Christ. He is indeed alive and we are witnesses!

Through the abundant grace of God, we were privileged to be monitoring the BBC( British Broadcasting Station) on early Sunday Monday when we heard about a lady who survived Ebola, has three kids ages 10, 8, 4 years and was abandoned by her boyfriend for fear of contracting the virus. This lady contracted Ebola while providing care for the wife of her Pastor. Due to the effect of the Ebola, she lost her voice, all her hair on her head and has been stigmatized and driven from three different communities once it became known she is a survival. She has no job. The Holy Spirit stirred us to intervene in this lady’s behalf. We went to find the journalist who ran the interview with her, and we traced her, got two of her three kids into our Christian school and helped her relocate to a new environment.

By the help of God a total of 121 Ebola orphans were placed into schools, at West Point, Wakakor and Low Cost village respectively. We are also in the process of adopting 10 of those Ebola orphans to bring them over to live with some members of our churches in the Monrovia area.

16 strategic leaders from our ministry were about to attend a three day Global Leadership Summit. Through the help of some of those principles learned, new paradigm shifts are occurring among our leaders.

There has been several robust visitations among our local churches by the Missions Director and the Monrovia District churches superintendent. These visitation has help us designed specific strategies to meet the growing needs among our planted churches.

Tremendous spiritual and numerical growths are occurring through the Holy Spirit at the 7 newly planted churches we began between April 2014 to April 2015. For examples, the church at Cotton Tree began in February 2015 with seven persons in attendance is now having 72 persons per Sunday. The church at Highway Community which began in March with 11 persons in attendance after a three day Jesus Film Movie now having a weekly attendance of 25 adults and 52 kids! The church at the Highway is congregating in the living room of a person of peace. The church at Hilltop and Whennay Town baptized over 32 new converts in March and April.

Alvin Jones has been able to move his family to Gleegbar Town to strengthen the mission work between the churches in Gleegbar Town, New Land and German Camp #3 respectively. Alvin moved his family to Monrovia a year ago when his wife divorced him. This brought trauma and great setback to the missions work in those three strategic church plants.

Due to the abolition of the Bible being taught in our government run school, we find it convenient to start our own schools where the Bible is the foundation of all we teach and practice. As a result of that, three school began at Brooklyn, Palmview and Kakata. These students are being gathered together and taught in the church buildings. As the Lord provides resources, we will build structures to accommodate the kids there. The school at Palmview began with a registration of 60 student and after a few weeks, 60 additional parents registered their kids.

The new church in Bong Mines at Nyenney which began with 7 new converts in March now has an attendance of 25 persons on Sundays.

Through a donation of 316 cartoons of Mana Food pallets of rice received in April, after the distribution of these among our local churches, many families were able to provide breakfast for their kids daily. It was a great blessing. It’s also very useful for our weekly kids outreach and discipleship( AWANA PROGRAM)

The National Youths of CCM leadership team made two visitations to the three planted churches in Kakata and the two churches in Bong Mines. They held a day long workshop to help strengthened the youths departments of those local churches.

The bathrooms to accommodate the student at the Brooklyn Community Church School were completed last week. These baths rooms are requirements of the government in terms of permit for operating a school.

The tarpaulin to temporarily provide covering for the new church at Cotton Tree has been provided and they will have a safe place to meet and worship collective until. The construction of a genuine structure to accommodate this growing church gets underway.

A three day National Strategic Leadership Conference hosted by Living Waters International just ended with 16 of our strategic leaders being a part while Jasper was selected to speak at that strategic conference.

I was also extended an invitation on the UNMIL Radio(UNITED NATIONS MISSIONS IN LIBERIA) to speak on what the Lord is doing through our ministry to reach out to children. This station goes nation wide and we took up the opportunity to share share those reports. What a privilege!!!

My wife Karen is rapidly recuperating from the surgery and will be out soon.

Pastor Emmanuel Garage underwent surgery two weeks ago and is recuperating. He is going to rest a while from missions work at the Gracefield Community Church.

CHALLANGES
Cameras are needed to be able to add more faces to words and deed from our planted churches. Most of what God is doing needs to be captured on cameras to share with you.

My vehicle is down due to the timing chain cutting with on a missions trip. This also led to the valves bending. There isn’t a store here that sells new parts for a 10 years model car. So we went out to get used ones to replace them, we have found the parts, but they aren’t exactly the same. This has restricted my movement for a month now. Usually I went out capturing most of our stuff on cameras as I visited these planted churches stations. I am praying to replace the old engine with an entire used engine.

The walls of the church at Cinta is raised to roof level, by the grace of God planks are being prepared to begin the preparation of the zincking. Cinta community church is a growing church of over 128 members in a village outside Monrovia. Thanks to Arthur Roosevelt as their Pastor.

Pray for my mobility to be repaired.

Jeremiah 32:17
"Ah, Lord God! Behold, You have made the heavens and the earth by Your great power and outstretched arm. There is nothing too hard for You."